I just bought a new pair of jeans from uniqlo. They are the ultra stretchy kind, which in my experience means “we’ll keep slithering down off your bum all day, so you’ll spend all day pulling your trousers up again and again and again”.

Like most sane people, I find it immensely annoying to have to be constantly adjusting my clothes, so I have been adding secret belts to my jeans for the past few years.

This is the first time that I have paused and taken photos at every step, so that I could share the method with others.

First off, get a pair of jeans. 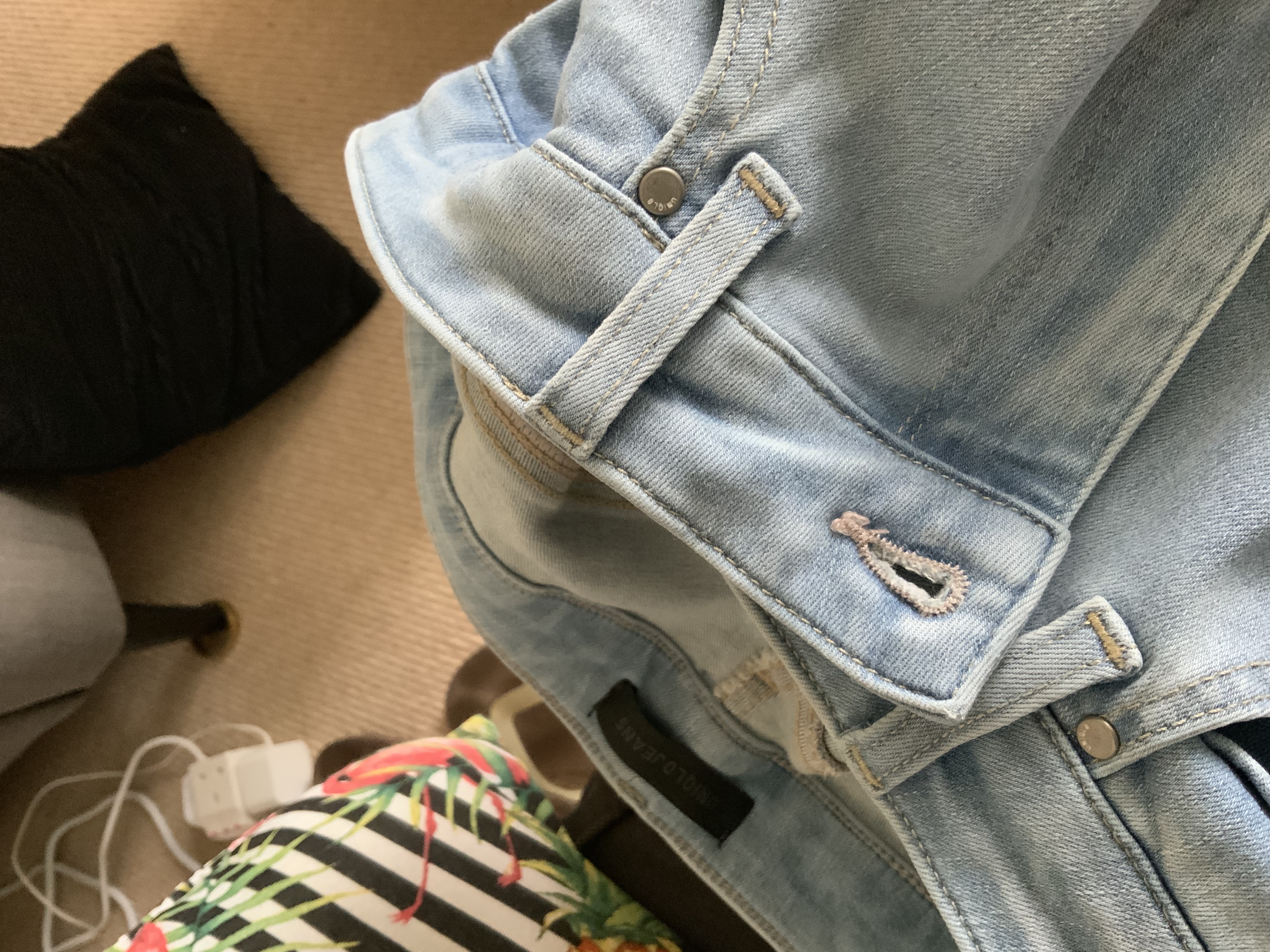 Then, a bit inwards from the button, cut a vertical hole.

How far in you cut depends on how stretchy they are. A lot of stretch, a small distance. Little stretch, bigger distance.

The goal is to leave enough of non-belted stretch / movement to allow for the jeans to flex when you move and sit and stuff. Or they’ll cut off your circulation.

Make the same cut on the other side of the waistband. 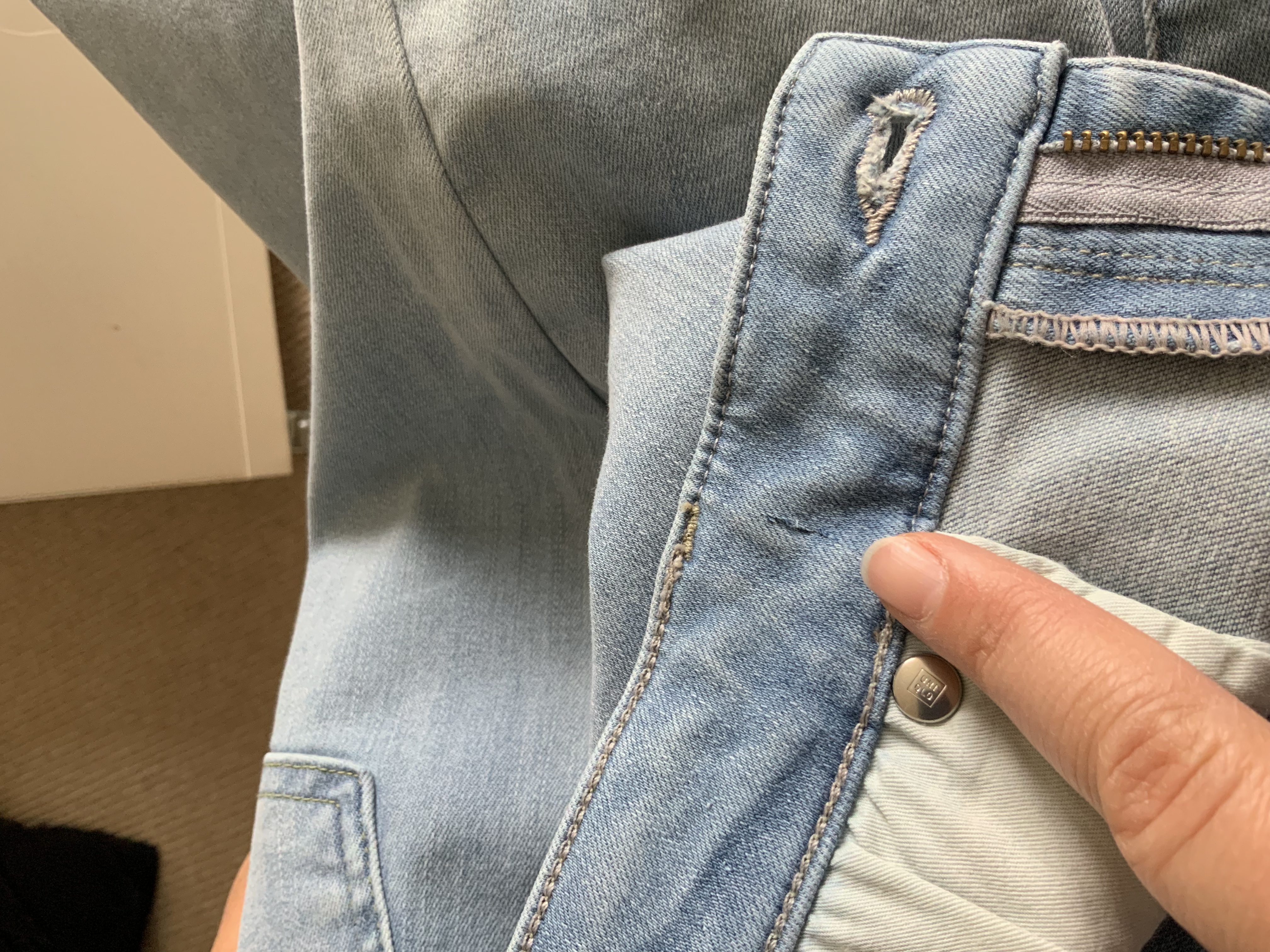 Next, take a solid ribbon that you have pre-cut to your “circumference” minus the “gap” of stretchiness you decided to leave, and weave a safety pin onto it. 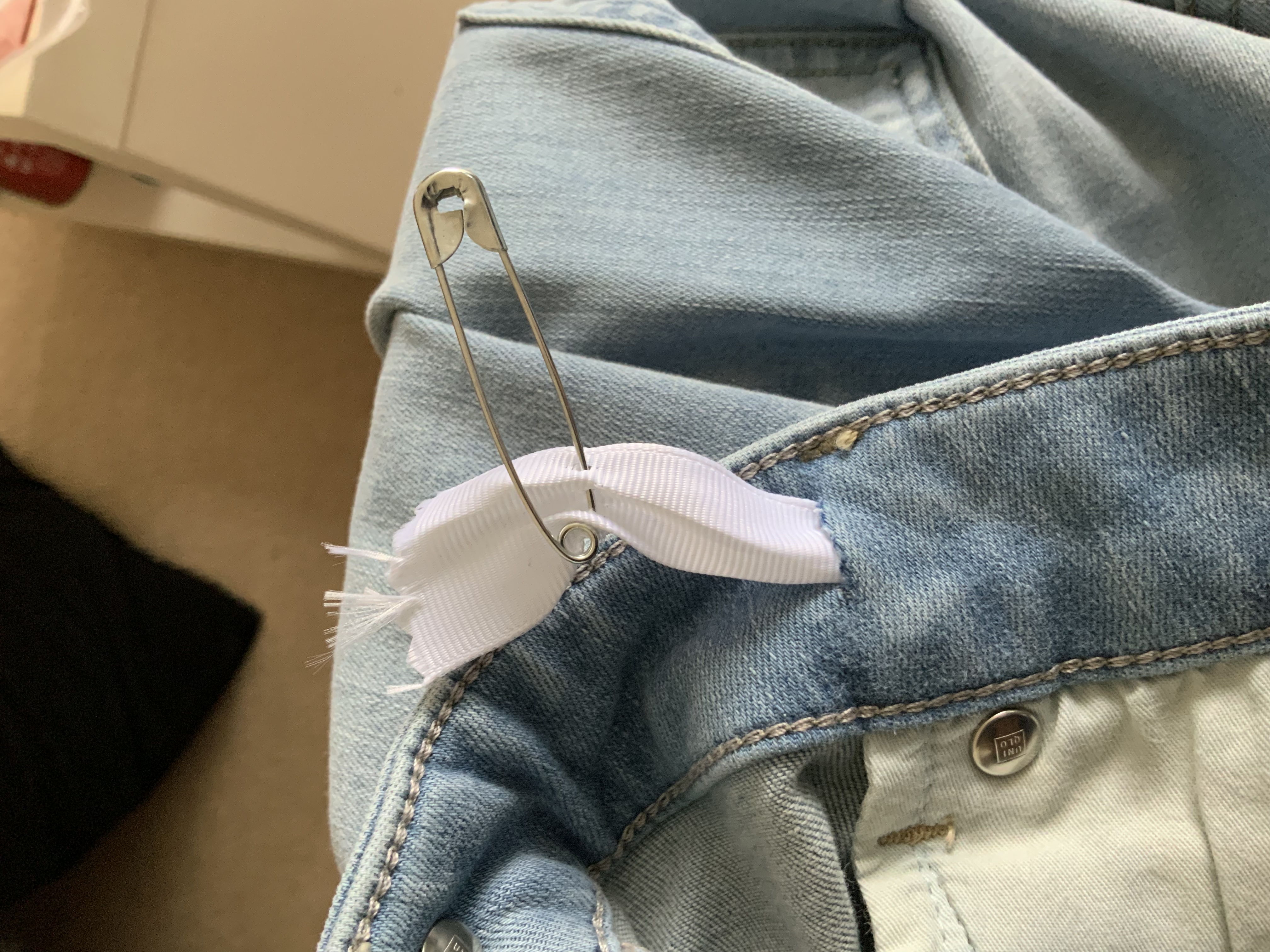 So now you have a ribbon threaded through the waistband of your jeans. Awesome. Don’t let it slip in. 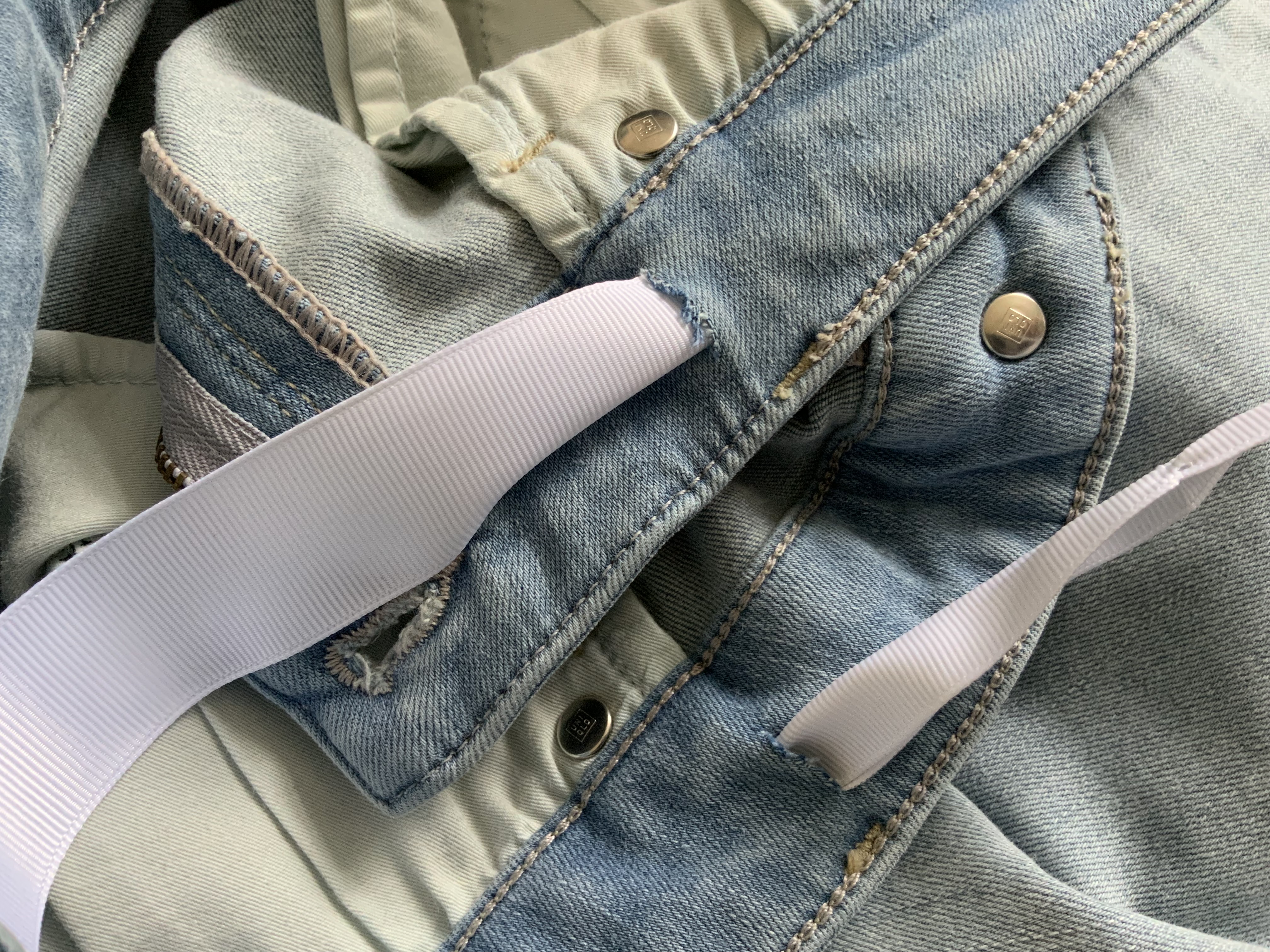 Next, stitch the ribbon down onto the jeans, both before the opening and after. 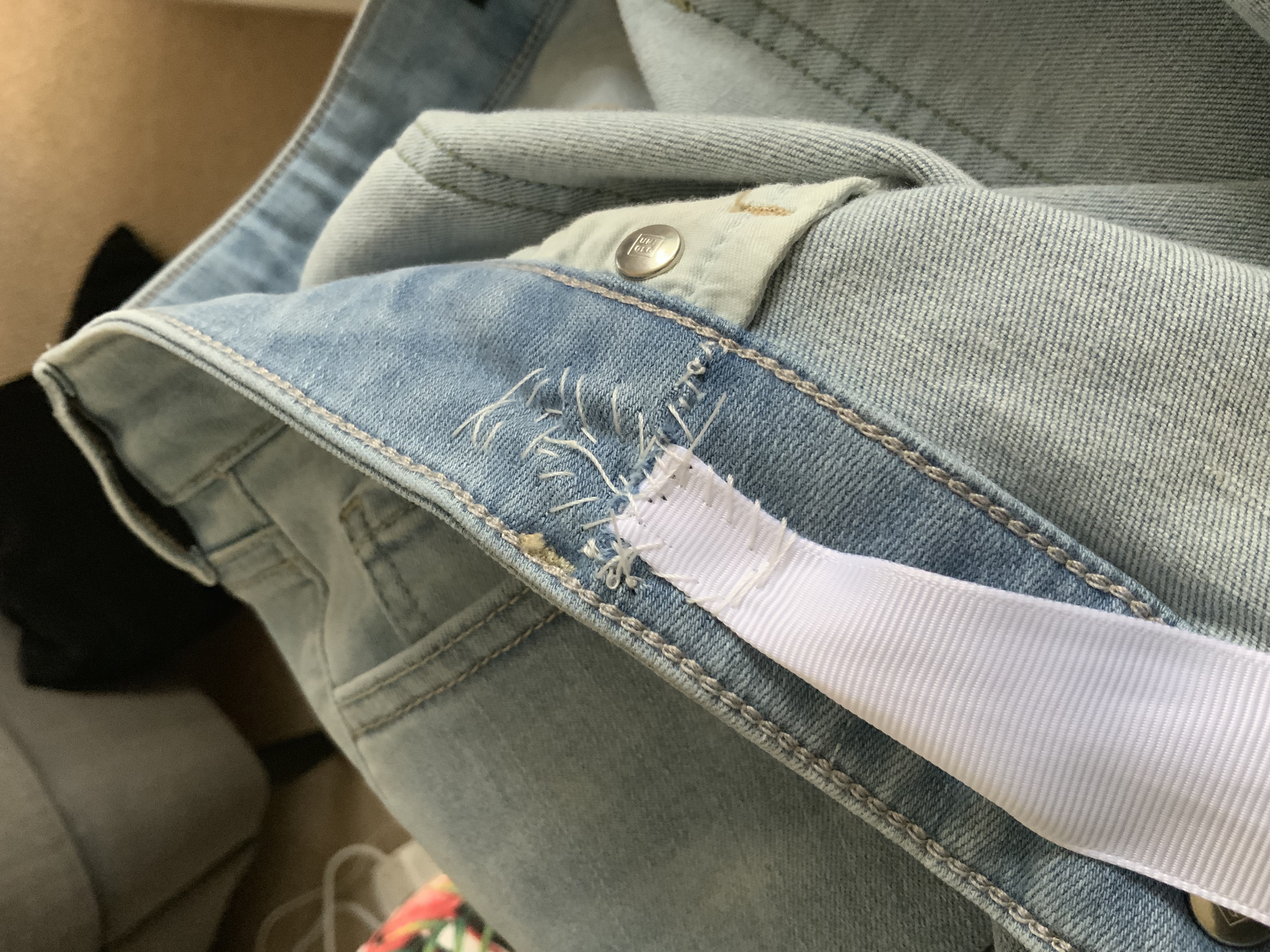 And then fold it back and stitch it down so it covers the lumpy and scratchy stitch job you did at first. 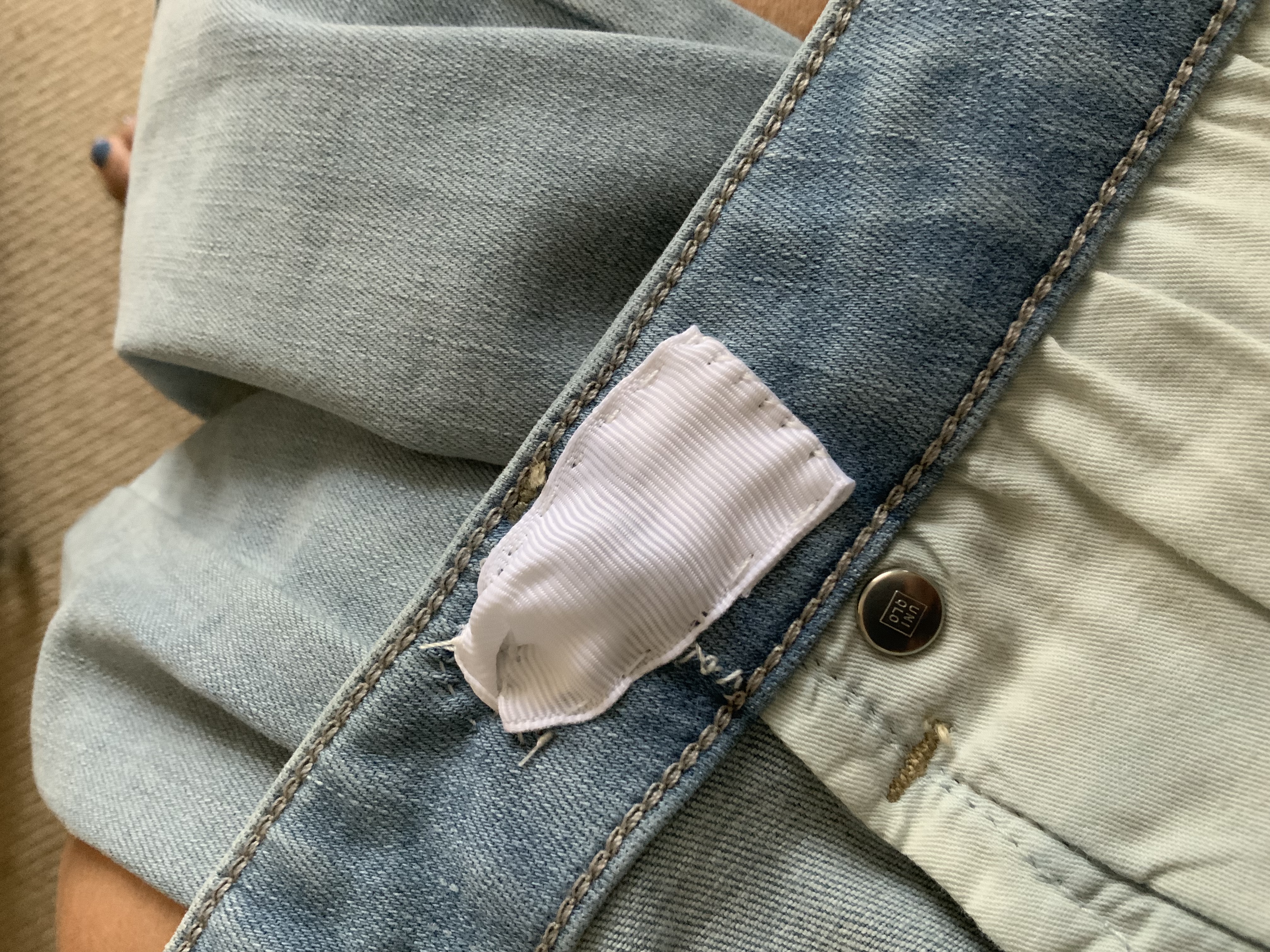 Do the same thing on the other side. First stitch the ribbon down as it’s coming out of the hole. 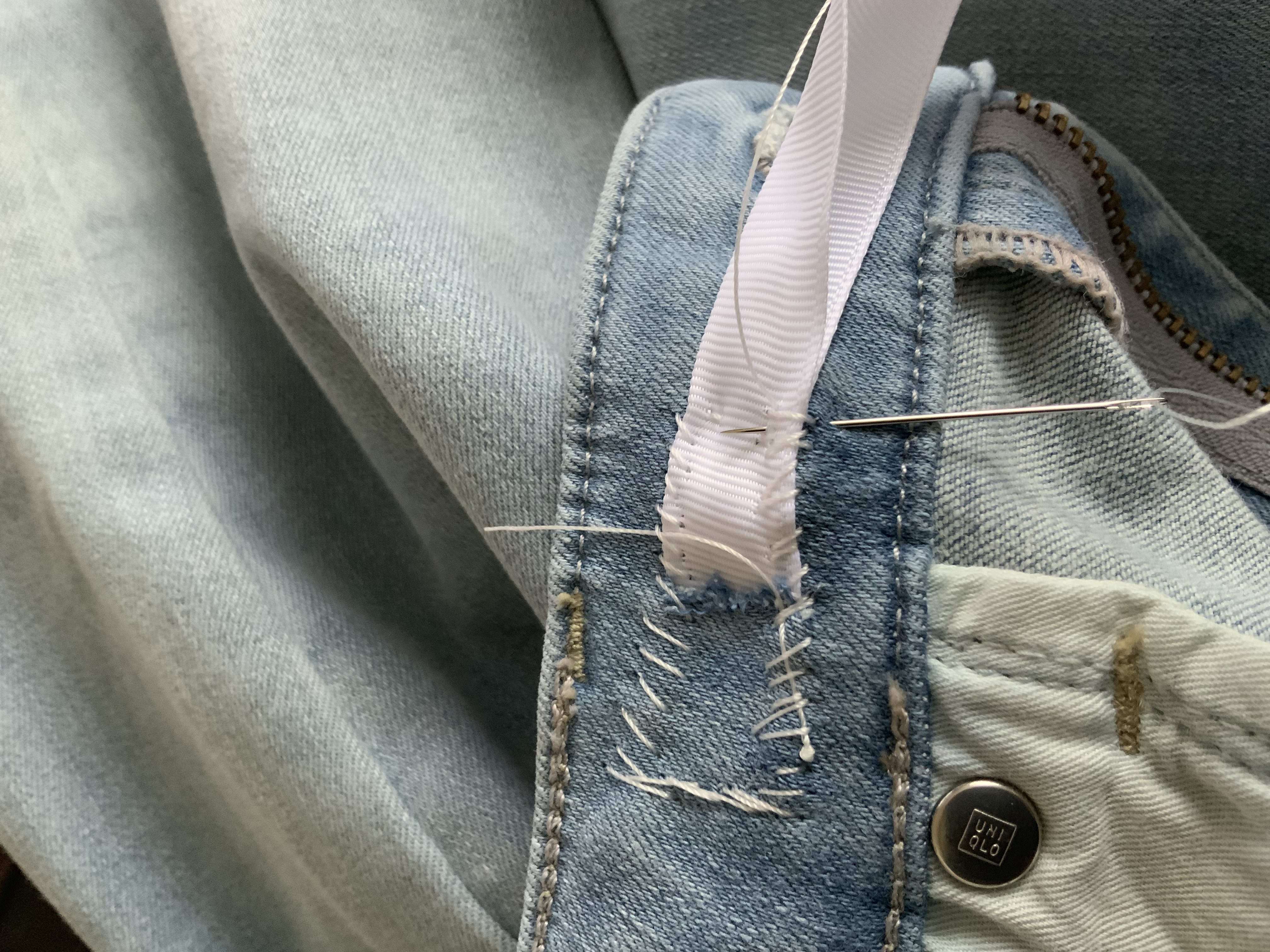 Then fold back and stitch down.

When you’re done, it should look roughly like this. 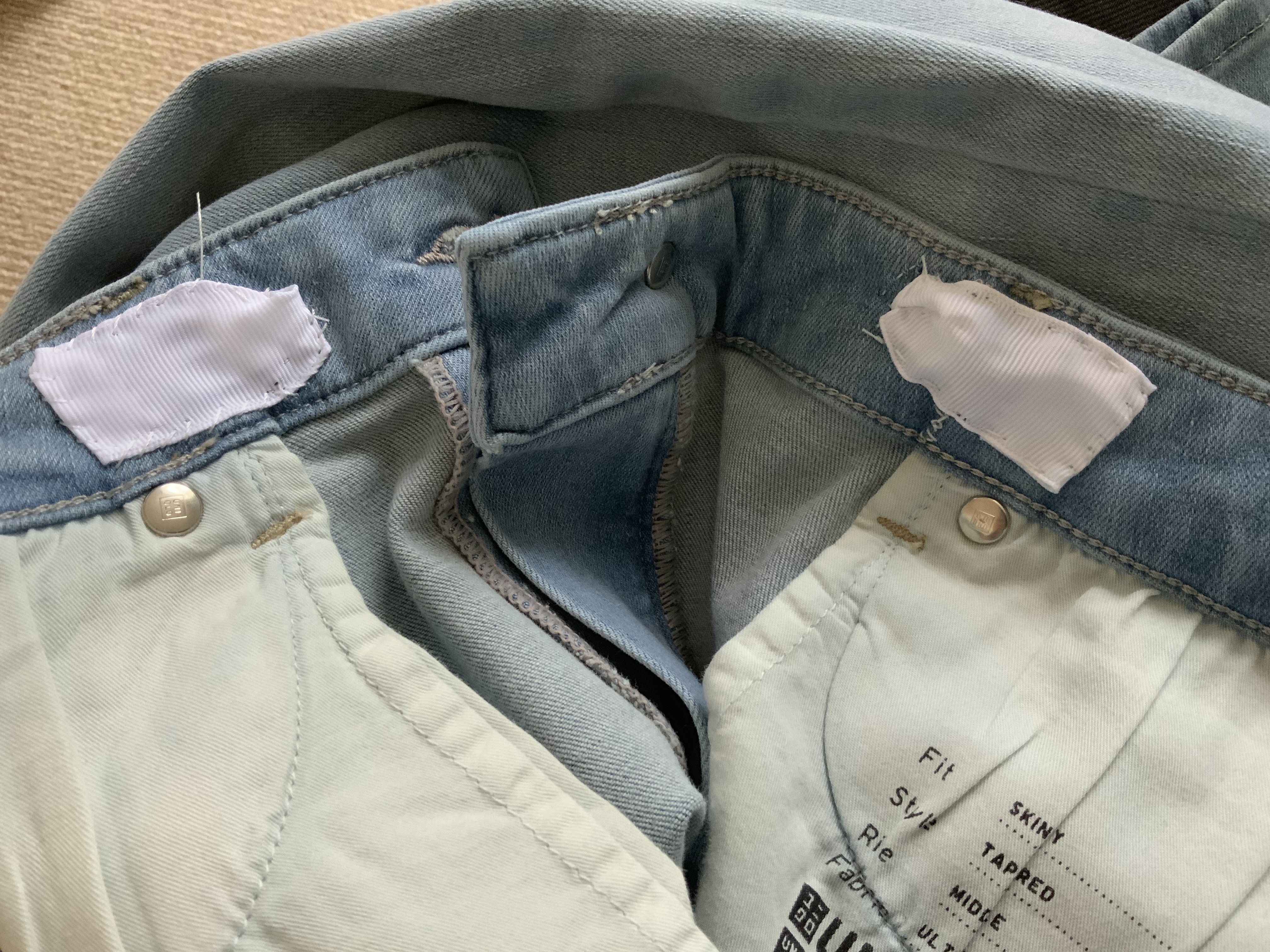 Which means that when you put it on, it looks like THIS! 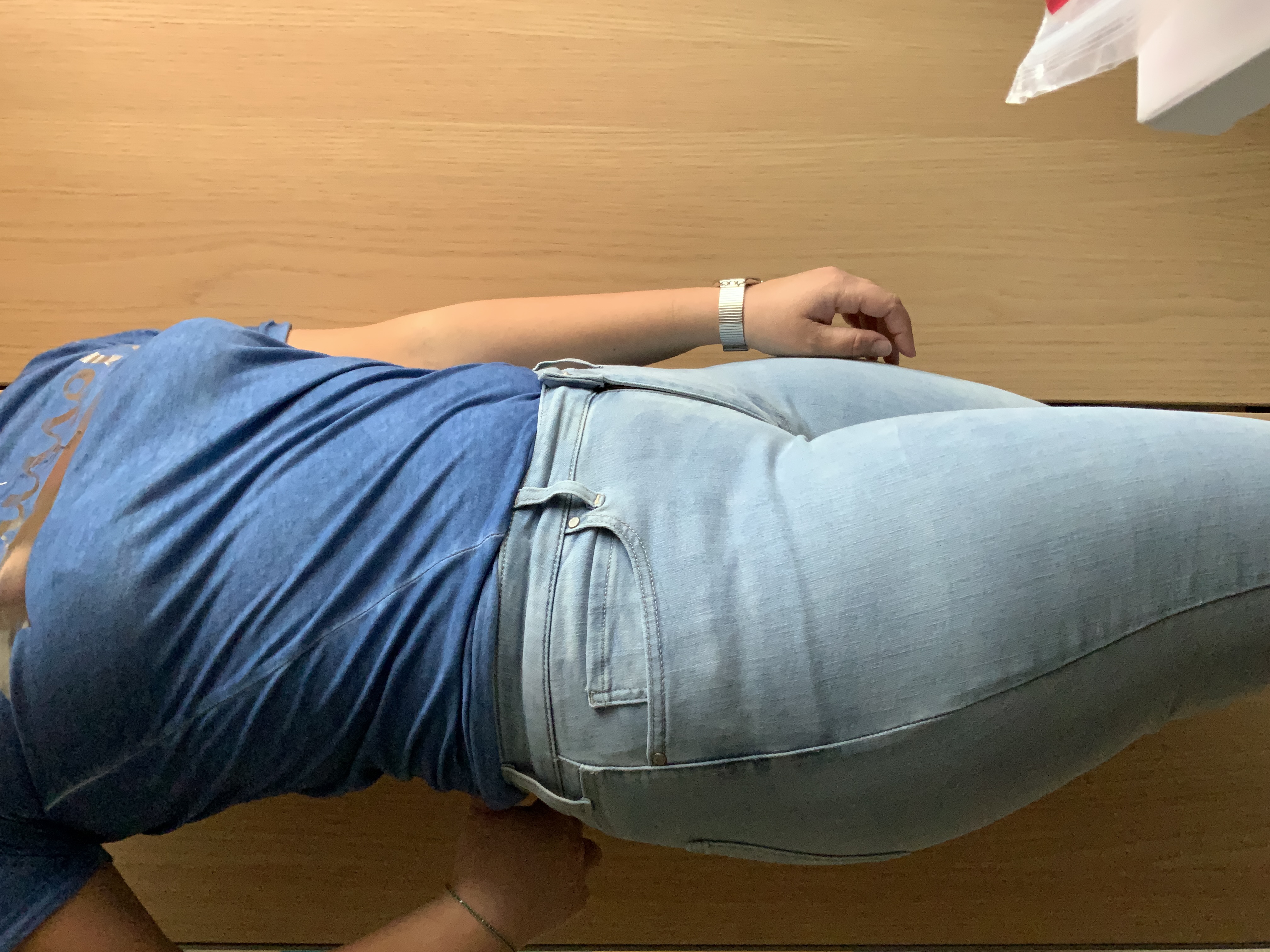 Enjoy having jeans that no longer slip off your bum!!

Over new year’s, I went with my parter to visit his brother in the US. While there, I happened to go to an art store and buy some pens… which I could not fit into the – frankly too small – pencil case I had brought along. So I went back ans bought a pen roll too!

Except the pen roll was so poorly made! The strap felt quite unpleasant and stiff to the touch, and the button was popping off and letting the roll unroll while in my bag! 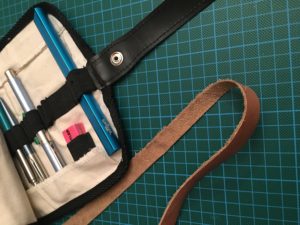 There are few materials I like less than plastic trying to pass itself off as leather… yuck! So today, as my first project of 2017, I replaced that strap with a leather one.

I had a leather skin, with a convenient straight edge, which I followed to manually cut a mostly straight strap much longer than the one on the pen roll.

Then I had to unpick the bad strap without damaging the pen roll! Embroidery scissors came in handy.

And finally, I stitched it using a sewing awl I bought in Germany about three years ago. My first ever real saddle stitch!! It was very exciting and surprisingly not very difficult at all! I am glad I have a massive chopping board to hand for doing my leather work on, or the cutting mat would be looking like a needlepoint project by now! 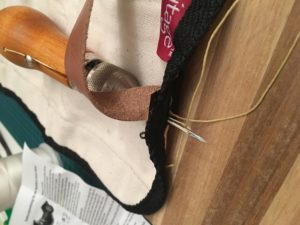 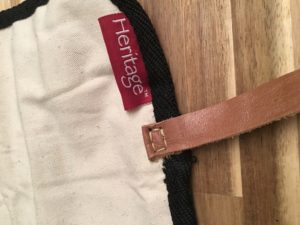 Well this is going to be a bit embarrassing for someone…

Last week, The Man and I were going out with a friendly couple. It was my best friend’s birthday, and she shrieked ecstatically when I suggested, months earlier, that we go to Herr Kettner’s Kabaret to celebrate. We immediately decided to dress up to the nines for it. With a background in theatre and neither of us being particularly shy, we kindly suggested to the men that they might like to take the gentlemanly way out and wear their tuxedos. Both complied very happily. I have to say, I’m completely smitten with mine, he looks _so_ ridiculously handsome in a tux! You’ll get to see if you agree later.

The night before, The Man was smart enough to try on his tux and see how it fitted. He looked dashing, and immensely uncomfortable. Then he tried sitting down. I feared for his mirrored wardrobe. Since the last time he’d worn it, he’d clearly had a few too many late evenings at work and heavy dinners followed by cake. (mmm… cake….) With Kettners Kabaret being in less than 24 hours though… this was a disaster.

So I looked at the trousers. They seemed designed to be altered. There was a single straight seam running up the seat of the trouser. No belt loops, nothing complicated. So The Man had a few options:

For some strange reason, despite a mild googling session for options 3 and 4, he was brave enough to go for option 5.

I’ve replaced a zip in a man’s trousers before. The front zip. It was a royal pain and incredibly fiddly, but the trousers were as good as new. And I have altered about 3 pairs of my own trousers (the devils had belt loops in the back, I cheated and removed them) when I lost weight. I was never going to throw away bell-bottomed blue-grey waist-high trousers! Nor navy blue velvet boot cut ones! Never in a million years! So they went from a size 14 (UK) to a size 10 (UK). So I’d done it before. But a tuxedo? On the day of the party? Jesus no!

Thankfully, I was working from home on the Friday, so I logged on a bit earlier than I would have otherwise, and used the more generous lunch break that earned me to do the alteration. It did take about 60-90 minutes, but I was going slowly, I was way too scared to mess something up.

So here it is, step by step. And I should warn you. I cheated.

First off, open the seam up. There were some elastics from the elasticated adjustable waistband that you’ll find in all good men’s trousers. I had to snip off the seams attaching those before being able to open up the seam properly flat. This is the seam all flattened and open. This is where the cheating happened. A professional seamstress would most likely have unpicked the seat seam first, then reassembled the garment. I, however, am not a pro. I’m an engineer. So I went for the duct-tape solution. I used the existing seam as my “tacks”. Instead of needing to align the fabric and pin it or tack it in place, I used the old seam for that, and just ran the sewing machine with a new seam just next to the end of the seat. See how beautifully made the trouser seams are? Love the finishing! This is part of how I could tell they were built to be altered. Then I unpicked the old seam. That took a _while_. I had to be very careful not to unpick the inner (new) seam at the same time! When that was done, I had to pull the elastics through a bit more, and re-attach them to the reinforced panels of the waistband. That was a bit tricky, as you don’t have much clearance to sew around that spot. The last step remains undocumented, and involved doing a few little stitches to secure the waistband in a folded position.

I also don’t have a photo of the trousers from the back or anything. I didn’t think of it. They looked flawless though! You wouldn’t have been able to tell that anything had been done to them!

And since I’ve been so terrible at showing you the trousers, maybe this will make up for it. I’m not shy by any means, and like I said neither are my friends. So here is a photo of the four of us, at Kettner’s Kabaret, to whom I also dedicate this post. Without that insane absinthe-soaked, burlesque-dancing, ukulele-singing, vintage photography-taking night, this blog post would never have happened. Well. Not in June, in any case.
I tried embedding the photo i wanted using Pinterest but their code didn’t work here. So here is the link to the photo if you want to see where it’s hiding in my pinterest boards.

And here is the photo itself.

The Man looks happy, doesn’t he?